In February of 2022, San Francisco passed Ordinance 18-22, which required landlords to first serve a “ten day notice to cure” (before serving the requisite state law eviction notice) to avail themselves of the unlawful detainer statutes in fault-based evictions.

Case law has asserted the primacy of state eviction procedure over local law to the contrary, while local law has been able to infiltrate procedure if it’s merely incidental to timing.

The San Francisco Apartment Association and the Small Property Owners of San Francisco challenged the ten-day ordinance on the basis of state law preemption, and in particular that a landlord cannot be permitted to wait ten days before serving the three day notice to pay rent or quit (rent being the basic bargain of the tenancy – what the tenant exchanges for occupancy). (The petition for writ of mandate can be found here.)

The Real Property Department of the San Francisco Superior Court granted the petition in part. It agreed that the City could not interfere with the state law procedures for recovering rent or possession of a rental unit. As to other bases for eviction, the Court found itself bound by Rental Housing Ass’n of N. Alameda Cty. v. City of Oakland (2009) 171 Cal. App. 4th 741, which upheld (without much analysis) the authority of Oakland to require a seven day cure period before enforcing certain violations. Whether this too is susceptible to challenge will be up to the Court of Appeal.

“Plaintiffs contend the amendment is preempted by Costa Hawkins because it seeks to regulate the rent a landlord may charge on exempt properties. The city contends and the trial court agreed that the amendment at issue here is a valid exercise of the city’s authority to regulate evictions. We agree that the amendment is designed to deter landlords from attempting to avoid local eviction rules by imposing artificially high rents in bad faith, and thus is a reasonable exercise of the city’s authority to regulate the grounds for eviction, which is not preempted. Accordingly, we shall affirm the judgment.”

The Court of Appeals upheld the San Francisco Real Property Court’s denial of the petition of San Francisco Apartment Association (and others) for a writ of mandate, enjoining Ordinance 5-19 – an amendment to the tenant harassment ordinance prohibiting increases for units exempt under Costa-Hawkins, if the increase coerced a tenant to vacate.

Petitioners argued that Costa-Hawkins’ preemptive effect on local price controls displaced local authority to circuitously discourage a landlord from exercising their rights. The panel was particularly focused, however, on the specter of the hypothetical “$1 million dollar a month” rent increase (which does not appear to have ever actually happened). It questioned why a local government would not have the authority to protect tenants from displacement, when the rent increase itself wasn’t the true goal. The ruling undercuts Costa-Hawkins and turns ordinary market transactions into jury questions. Landlords would be wise to obtain market advice from qualified experts – and perhaps even negotiate with tenants – before imposing increases.

“When Menchini failed to pay the rent for February and March 2019 before the three-day notice to pay rent or quit expired, he forfeited the lease, and the landlord was entitled to possession as against the sublessee. Lara was not required to accept rent from Menchini’s subtenants. (See Civ. Code, § 1947.3, subd. (a)(3)(A) [‘A landlord . . . is not required to accept the rent payment tendered by a third party unless the third party has provided to the landlord . . . a signed acknowledgment stating that they are not currently a tenant of the premises for which the rent payment is being made and that acceptance of the rent payment does not create a new tenancy with the third party.’]. Had Lara accepted rent directly from the subtenants without such a signed acknowledgment from them, she may have inadvertently created a new tenant-landlord relationship with them.”

In Lara v. Menchini, a landlord prosecuted an unlawful detainer for non-payment of rent, following non-payment by the master tenant. Subtenants approached the landlord in response to her initial rent demand, attempting to pay their rent directly to her. She refused.

The landlord prevailed at trial and the subtenants appealed on the basis that unlawful detainer law and Civil Code §1947.3 required her to accept their rent to cure the notice. The court of appeal rejected this contention.

It held that the non-payment of a master tenant effected the forfeiture of the lease, except in previous, distinguishable cases, where the landlord demanded rent from the subtenants. Further, Civil Code §1947.3 (which allows third party rent payers to help tenants avoid default) did not apply, because the landlord was permitted to require that they declare they are not “occupants”. (After all, occupancy coupled with payment of rent to the landlord creates a tenancy.)

Of course, the subtext of this dispute is that the subtenants were attempting to usurp their departed master tenant’s rent control, but without a basis for doing so. The court concluded that the landlord was entitled to demand the subtenants enter a new lease at market rent if they were going to remain in possession and then to proceed in unlawful detainer, when they declined.

On December 18, 2020, San Francisco adopted Ordinance 265-20, which implements the City’s first rental unit registration ordinance. With Proposition 21 on the ballot in November of 2020, the Board of Supervisors was poised to implement vacancy control if the proposition had passed (and had effectively repealed the Costa-Hawkins Rental Housing Act).

Costa-Hawkins survived, as did a modified version of the rental unit registration ordinance. Commencing July 1, 2022 (for buildings with 10 or more units) and March 1, 2023 (for all other residential units), owners must provide the following information to the Rent Board:
END_OF_DOCUMENT_TOKEN_TO_BE_REPLACED

San Francisco landlord-tenant relationships have been anything but predictable in the last year. Governor Newsom enacted Executive Order N-28-20 on March 16, 2020, which suspends certain state laws to open the field for local regulation on evictions. Mayor Breed declared a local state of emergency on February 25, 2020 (with several dozen supplements through the rest of the year) seeking to curtain efforts to recover possession of rental units, other than for health and safety reasons or pursuant to the Ellis Act (which the City can’t prohibit). The California Judicial Council even stepped in (arguably in excess of its authority or even any authority that Gov. Newsom could delegate under the Emergency Services Act) to prohibit the issuing of summonses in residential eviction lawsuits through August of 2020.

California enacted AB 3088 on September 1, 2021, as a comprehensive scheme to address the patchwork efforts of the different branches and different levels of government. It prohibited cities from adopting, extending, renewing local regulations protecting tenants from evictions, imposing its own.

Not to be deterred, the Board of Supervisors passed Ordinance 216-20 (known colloquially as “Preston 2” following the supervisor’s previous legislation prohibiting evictions for non-payment of rent at the local level). Ordinance 216-20 prevents landlords from recovering possession of a rental unit “on or before March 31, 2021 unless necessary due to violence, threats of violence, or health and safety issues”. The restriction even applies to owners who rent out individual rooms in their homes. Deferential to (some of) AB 3088, the ordinance acknowledges that it does not apply to “evictions due to unpaid rent or any other unpaid financial obligation of a tenant under the tenancy that came due between March 1, 2020 and January 31, 2021” or evictions under the Ellis Act, but it otherwise fails to address the comprehensive prohibition on local eviction regulations imposed by AB 3088.

With the continuation of the shelter-in-place order during ongoing concerns over the COVID-19 pandemic, SPOSF once again conducted its monthly Q&A panel virtually. The January 2021 panel featured Shoshana Raphael and Justin A. Goodman of Zacks, Freedman & Patterson, PC. (Goodman is also a board member of SPOSF.) 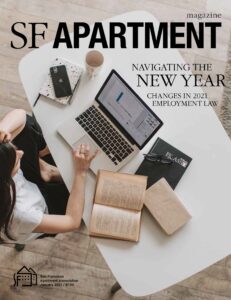 Justin Goodman’s quarterly column Surreal Estate was featured in the January 2021 issue of SF Apartment Magazine. This installment, titled “The Laws of Unintended Consequence” considered the practical effect of our local housing laws as measured against their stated intent.

“Section 1671, subdivision (b), provides that a liquidated damages clause ‘is valid unless the party seeking to invalidate the provision establishes that the provision was unreasonable under the circumstances existing at the time the contract was made’. Under this subdivision, a liquidated damages clause becomes an unenforceable penalty ‘if it bears no reasonable relationship to the range of actual damages that the parties could have anticipated would flow from a breach’. The amount set as liquidated damages ‘must represent the result of a reasonable endeavor by the parties to estimate a fair average compensation for any loss that may be sustained’. Absent a relationship between the liquidated damages and the damages the parties anticipated would result from a breach, a liquidated damages clause will be construed as an unenforceable penalty’. In the context of a stipulated judgment, the amount of the judgment must reasonably relate to the damages likely to arise from the breach of the stipulation, not the alleged breach of the underlying contract, because it is the breach of the stipulation that allows the plaintiff to enter judgment against the defendant. Thus, we analyze the damages flowing from the breach of the stipulation itself, not any damages that may have arisen from the tenants’ alleged breach of the underlying lease agreement.”

In Graylee v. Castro, a landlord served a three-day notice to pay rent or quit, contending his tenants owed $27,170 in unpaid rent for a house they leased, and filed an unlawful detainer action when they failed to cure the notice. The tenants answered and disputed the amount claimed in the notice. The parties settled prior to trial, pursuant to Section 664.6 of the Code of Civil Procedure, which allows parties to pending litigation to enter a settlement contract that calls for entry of a stipulated judgment (sometimes, as in this case, only in the event of breach).

END_OF_DOCUMENT_TOKEN_TO_BE_REPLACED 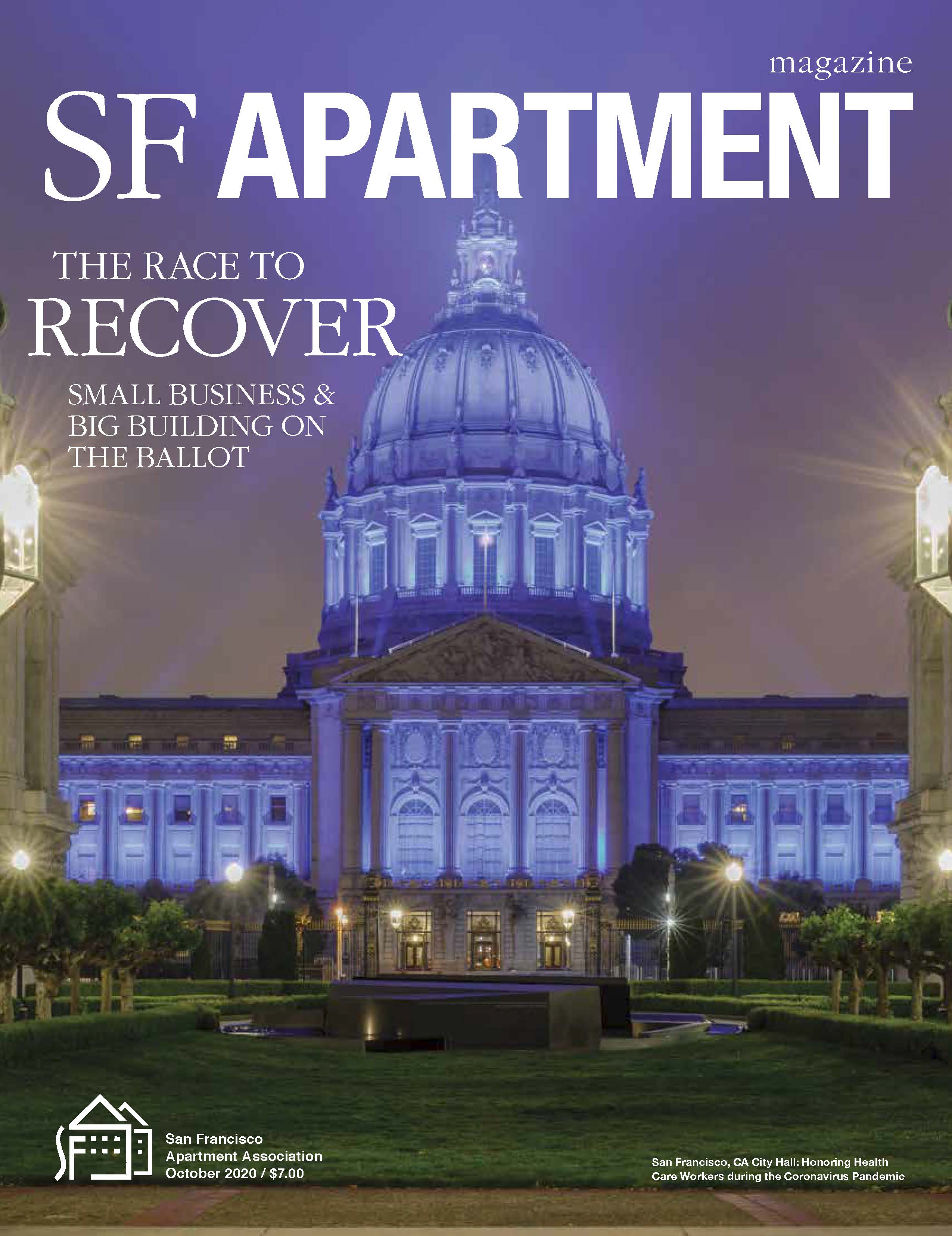 Justin Goodman’s quarterly column Surreal Estate was featured in the October 2020 issue of SF Apartment Magazine. The October column looked at the expanding use of “parklets”, as local restaurants and other businesses work to recover from the impacts of the pandemic amid continued and onerous regulation.

With the continuation of the shelter-in-place order during ongoing concerns over the COVID-19 pandemic, SPOSF once again conducted its monthly Q&A panel virtually. The October 2020 panel featured Shoshana Raphael and Justin Goodman of Zacks, Freedman & Patterson, PC. (Goodman is also a board member of SPOSF.)