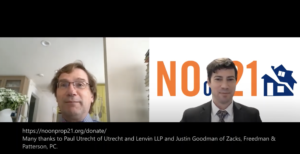 Paul and Justin discussed existing law and the nuances of Proposition 21 – this year’s effort to repeal the operative provisions of the Costa-Hawkins Rental Housing Act (succeeding a previous effort by Michael Weinstein in 2018, and a legislative effort in 2017).

Paul and Justin also contemplated the likely unintended and perverse consequences of once again allowing the vacancy control that Costa-Hawkins eliminated at the state level back in 1996. We at Costa-Hawkins.com rarely take political stances on potential changes in law, but if for no other reason than we would need a new domain name (and that the change in law would authorize misguided rental housing policy statewide), we urge you to donate and vote!

SPOSF’s mission is to provide owners of small rental properties in San Francisco with the tools and information necessary to conduct business successfully in a difficult regulatory climate, through educational programs, publications, and workshops that seek to help members better understand their rights and obligations, how to work constructively with city and state officials, and how to deal effectively with their tenants. SPOSF also seeks to protect the rights of small property owners against unfair and burdensome regulations through legal advocacy.

SPOSF holds monthly meetings at St. Mary’s Cathedral, located at 1111 Gough Street in San Francisco. You can join SPOSF by clicking here. Members have access to the full monthly newsletter.

“When the owner of a single-family home rents bedrooms in the home to separate tenants, does the Costa-Hawkins Rental Housing Act exempt each of the tenants’ rooms from local rent control because the home is considered an exempt dwelling under the Act? Jonathan Owens rented out bedrooms in his home to three unrelated individuals. He contends the City of Oakland’s Housing, Residential Rent and Relocation Board (the Rent Board) and the trial court erred when they determined the rented rooms are subject to Oakland’s rent control ordinance. We agree with the Rent Board and the court and affirm the trial court order denying Owens’s petition for writ of mandamus.”

Landlord Jonathan Owens owns a single-family home in Oakland. He lives in the home and rents three individual bedrooms to three unrelated tenants. One tenant filed a petition at the Oakland rent board “alleging her housing became unsuitable due to disruptive construction work and hazardous conditions on the premises [and that] Owens failed to provide required notice of the Rent Adjustment Program and retaliated against her by terminating her lease when she complained about the construction work and sought a reduction in rent.”

Owens responded that her tenancy was exempt from the jurisdiction of the rent board because the entire property was “alienable, separate from the title of any other dwelling unit” – a status that would exempt the property from local rent controls under Costa-Hawkins.

What happened next was procedurally bizarre. The hearing officer dismissed the petition on a finding that the tenant was in arrears on rent without justification. However, for some reason, the hearing officer made a gratuitous finding that the tenancy was not exempt because the rental of individual rooms meant that no dwelling was “separately alienable”.

Owens appealed to the rent board commission – presumably to avoid any collateral estoppel effect of this determination and renewed his argument for exemption under Costa-Hawkins/ The rent board unanimously affirmed the decision. Owens then petitioned for writ of mandate in the superior court, and the court affirmed as well, on the narrow issue of Costa-Hawkins preemption. The First District Court of Appeal affirmed.

The decision is problematic for several reasons. First, the broad scope of the petition related to many things having nothing to do with rent adjustments. As a result of the judicial powers doctrine, the rent board likely lacked the jurisdiction to render any relief. To render such a determination on a dismissed petition compounded the overreach. Finally, to the extent that most of this was about eviction controls (which Costa-Hawkins does not regulate), it is puzzling that Owens did not raise the argument that Section 8.22.350E of the Oakland Municipal Code exempts owner-occupied homes from eviction controls, if the owner shares “kitchen or bath facilities” with the tenants. While the opinion does not discuss whether Owens shares such facilities, it can almost be assumed from the description “single family home” that he and all the tenants shared the same half-and-half carton when making their coffees.

The rule of law is also somewhat hollow. The purpose of eviction controls is to prevent landlords from circumventing rent controls by the expediency of terminating the existing tenancy and raising rates on a new one. A finding that this is a multi-dwelling property for rent control purposes has little effect if Owens can capriciously terminate tenancies whenever he wants to increase the rents. Further, from a policy perspective, it is inconsistent that the institutional landlord of a single-family home can escape rent control, but a mom-and-pop owner-occupying landlord cannot. Nonetheless, Owens is a warning that landlords should be particularly cautious in renting multiple rooms under different leases. 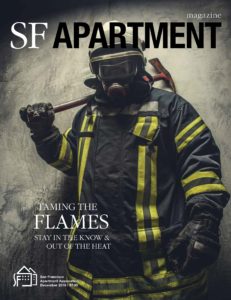 Justin Goodman was featured in the Legal Q&A for the December 2019 issue of SF Apartment Magazine – the official publication of the San Francisco Apartment Association.

Justin evaluated a landlord’s obligations (to provide a habitable premises and to avoid disrupting a tenant’s right to quiet enjoyment) at times when PG&E is using rolling blackouts to preserve the power grid.

Justin and his colleague Shoshana Raphael also wrote a feature article “Up in Flames“, which explores a landlord’s duties to tenants and their rights and obligations to the City when their apartment building catches fire. 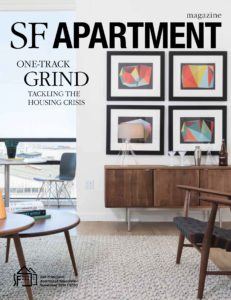 Justin Goodman was featured in the Legal Q&A for the November 2019 issue of SF Apartment Magazine – the official publication of the San Francisco Apartment Association.

Proposition 10 boldly failed in the November 2018 election (with only a couple bay area counties voting “yes” in a majority). The battle over Proposition 10 was one of the most expensive in California history, and the “no” camp was ultimately successful in arguing that expanding rent control would “increase the states housing shortage, exacerbate overall affordability issues and hurt the investments of single-family homeowners”.

Not to be deterred, Michael Weinstein of the AIDS Healthcare Foundation is back with Proposition 10: 2.0:

Titled the Rental Affordability Act, it would seek to expand the authority of cities to regulate rents by changing several provisions of the Costa-Hawkins Rental Housing Act (including the name of the act itself, which must be synecdoche for “statewide unaffordable rental rates” for tenant advocates by this point.)

It would remove the “new construction” exemption, in favor of a 15-year phase-in period for newly built units. It would remove a lesser known provision that grandfathers in exemptions in local ordinances that pre-dated the act. Most sweeping, it would eliminate the language of “vacancy decontrol” and replace it with a state-wide policy authorizing local rent control ordinances. (This language would mostly be symbolic, given the landmark decision Birkenfeld v. City of Berkeley (1976) 17 Cal.3d 129, where the Supreme Court first recognized this authority.) Finally, for cities administering a rent control ordinance, the Rental Affordability Act would restrict the rental rate to 15% above the rate for the previous tenancy (with no provisions evaluating the fairness of the previous rate – e.g., if it was leased to a family friend at a steep discount).

Unsurprisingly, the California Apartment Association has taken a position against the new initiative.

San Francisco has amended the Rent Ordinance to add to the definition of “tenant harassment” and “misdemeanors” certain rent increases “imposed in bad faith with an intent to defraud, intimidate, or coerce the tenant into vacating the rental unit” in circumvention of the just cause for eviction provisions. This will include circumstances where:
(1) the rent increase was substantially in excess of market rates for comparable units;
(2) the rent increase was within six months after an attempt to recover possession of the unit: and
(3) such other factors as a court or the Rent Board may deem relevant.

According to the Board of Supervisors, this legislation was prompted, in part, by specific cases in recent years with headline-grabbing rent increases. Whether justified by comparables or not, the tenants in those anecdotes chose to vacate, rather than pay the rent (although, at least one sued over the same theory that the City has now codified).
END_OF_DOCUMENT_TOKEN_TO_BE_REPLACED

SF Gate reports on the defeat of Prop. 10 at the ballot. The measure to repeal the Costa-Hawkins Rental Housing Act “fell behind early and continued to trail by a margin of about 65 percent to 35 percent throughout the night”.

Proposition 10 followed AB 1506 (2017), a legislative attempt at repeal, which failed to get out of committee.

As the Chronicle describes it, “Prop. 10 would repeal the 1995 Costa-Hawkins Rental Housing Act, which protects properties built that year or later from rent control. The law also prevents cities with preexisting rent control laws from extending them to newer units; San Francisco’s ordinance, for example, remains limited to housing built before 1980. And Costa-Hawkins exempts single-family homes from rent control while guaranteeing property owners the right to raise rents to market value when units are vacated.”

The proposed legislation would address the part of the “venn diagram” of tenant protection law where single family homes are subject to eviction control (if they are built before June 13, 1979) but are exempt from rent control if the tenancy commenced after 1995 (under the Costa-Hawkins Rental Housing Act). The logic of this law is that landlords can increase rents in these units without local restriction, but if they increase rents with the intention of causing their tenants to vacate, then the “real” purpose is to avoid eviction controls, not to get market rate rent.
END_OF_DOCUMENT_TOKEN_TO_BE_REPLACED