Borsuk v. Appellate Division, the long-awaited reconsideration of the “Delta Motion”, led to a split of authority in the Second District Court of Appeals, allowing lower courts in California some latitude in evaluating jurisdictional challenges (i.e., motions to quash) to take the form of “mini trials”, requiring a landlord to prove up a cause of action for unlawful detainer before the tenant had even answered.

San Francisco’s Housing Court immediately took up the opportunity to deny these Delta motions to quash on procedural grounds. For now, it has the approval of the Appellate Division.

San Francisco has passed a much publicized amendment to the owner move-in provisions of the San Francisco Rent Ordinance to provide a defense for students and educators, in an effort to mitigate disruption during the school year.

The new language broadens the protection to include educators, as well as children, making it a defense to an eviction that a notice of termination of tenancy expires during a school year.

This defense now also extends to “educators” so long as the “tenant” with a family relationship to the educator has resided in the unit for 12 months. Presumably tenant attorneys will now expand their practice to include family law for last-minute marriages.

Ordinance 55-16 extends the defense to four other bases for non-fault evictions (including for demolition/removal of a unit, conducting capital improvement/ substantial rehabilitation work). This new exception does not apply when the landlord seeks to perform seismic work, under Building Code Chapter 34B, showing that the Board of Supervisors is aware some things are more important than the San Francisco housing crisis.

Finally, Ordinance 55-16 eliminates the former “trump card” where the landlord seeking to move in also has a child who will reside in the unit. Perhaps the move into a new home would also disrupt the studies of the landlord’s kid.

Despite some reports, this does not affect Ellis Act terminations.

You can read the full text of Ordinance 55-16 here.

San Francisco now requires conditional use approval (via hearing by the Planning Commission) for the removal of both authorized and “unauthorized” (i.e., unpermitted) residential units, under Section 317 of the Planning Code.

Ordinance 33-16, modifying Section 317 of the Planning Code, follows (and repeals) Ordinance 23-16, requiring conditional use authorization for removal of authorized and unauthorized units in the C-3 (Downtown Commercial) District.

If this description sounds an awful lot like a tenant’s use of a rental unit dictates its status as rent controlled housing, that might not be far off. (Seemingly, this would lead to the same result as in the 2014 appellate decision, Burien, LLC v. Wiley, notwithstanding a landlord’s innocence as to the illegal use.)

The City of Oakland has passed an emergency interim ordinance to curtail the effects of rent increases. While Oakland’s rent ordinance already prohibited rent increases exceeding the allowable annual rate (keyed to CPI adjustments), landlords could impose rent increases exceeding this rate (up to ten percent) for things like capital improvement passthroughs. (After all, everybody likes living in apartments that have roofs.) Also, two and three-unit, owner-occupied buildings had been exempt. Under Ordinance 13360, the owner-occupied exemption and CPI-exceeding increases are eliminated during the 90-day moratorium period. The moratorium also prevents unauthorized increases for substantially rehabilitated buildings.

There is, perhaps, a difference of opinion about whether constraining housing supply (by creating price ceilings and disincentives for tenants to move) actually puts upward pressure on housing prices overall. And, for now, this moratorium prevents covered rent increases for only 90 days. Maybe the moratorium will meet falling prices in a cooling market and have the desired effect of preventing displacement. Or, if the prohibitions become permanent, maybe we can track their effects in the next housing crisis.

Among other things, the new legislation requires disclosure to tenants of their rights under the ordinance, and it allows tenants to rescind an executed buyout agreement for up to thirty days. The ordinance was adopted on March 31, 2016 and becomes effective April 30, 2016. The Berkeley Rent Board has also generated required forms to comply with the ordinance.

The San Francisco Housing Court has begun sustaining demurrers to unlawful detainer complaints that fail to allege compliance with the “dominant motive” requirement of the Section 37.9(c) of the Rent Ordinance and/or attach termination notices that do not include the Rent Board’s Form 1007, containing multi-language advice to tenants about the Rent Board.

These new requirements – imposed by the “Jane Kim Amendment” to the Rent Ordinance – have been catching some practitioners off guard (which, to some degree, may have been the point). While it is a simple enough task to amend the complaint to state that “collection of rent” (or whatever) is the landlord’s “dominant motive” (as is now required by the amended Section 37.9(c)), the missing Form 1007 is more problematic.

Section 1166 of the Code of Civil Procedure, requiring landlords to attach termination notices, does allow amendment of the complaint upon failure to attach a copy of the notice (or, unless leave to amend is futile, a complete copy of the notice). Unfortunately for landlords, Form 1007 must be attached to the notice, the service of which is a prerequisite to an unlawful detainer cause of action.

Following the recent Borsuk decision, Delta Motions To Quash no longer appear to be a viable pleading challenge to test the sufficiency of a cause of action for unlawful detainer. Nonetheless, this kind of defective pleading would seem to appear on the face of the unlawful detainer complaint, making it appropriate for demurrer. And, where a properly-served and legally sufficient notice of termination is a prerequisite for unlawful detainer standing, leave to amend is not likely to rescue the lawsuit.

In Chen v. Kraft, a rent-controlled tenant used her apartment for “transient occupancy” (listing it on Airbnb), and her landlord was successful in enforcing provisions of the Los Angeles Municipal Code, prohibiting bed and breakfasts in “R1 Zones”.

The Appellate Division of the Superior Court reasonably found a violation of law where someone (whether tenant or not) uses their dwelling unit as a hotel in violation of zoning law. (Compare, for example, San Francisco, whose “Airbnb law” constituted a city-wide zoning change in favor of short term rentals.)

However, the language of the opinion suggests a gross misunderstanding of unlawful detainer law. Generally, under the unlawful detainer statutes, a landlord will have to serve a three-day notice for, e.g., non-payment of rent, breach of lease or illegal use. The tenant’s lease required a ten day notice period (which is fine) for breaches of covenants of the lease (including non-payment of rent). It is not clear whether one of these covenants included using the apartment for “legal purposes”.

The tenant understandably opposed the landlord’s motion for summary judgment in seeking to prove a case, other than what was put at issue by the complaint – specifically, whether the tenant was making an illegal use of the apartment, as opposed to, e.g., breaching a provision of the lease prohibiting illegal use. And, while this may seem like a distinction without a difference, the unlawful detainer statutes provide for specific bases for standing to bring an action for unlawful detainer. The court upheld the trial court determination that the landlord had standing under Cal. Code Civ. Proc., §1161(4) (for illegal use). However, among the three distinct notices to cure or quit that the landlord served, not one of them was under section 1161(4). Where the unlawful detainer statutes are supposed to be strictly construed, this ruling was incorrect as a matter of law.

Now, a three day notice based on illegal use (under section 1161(4)) is the only such notice that cannot be “cured”. (The Appellate Division also got this wrong, concluding that one element of this claim was that the “defendant continued to use the premises for an unlawful purpose after expiration of the period stated in the notice”. As this notice cannot be “cured”, it doesn’t matter if the tenant ceases the offending behavior.) Therefore, in the long term, the landlords would most likely have prevailed in a second action to recover the unit based on Airbnb use. But this should not have mitigated the failure to correctly plead a case for unlawful detainer based on illegal use, and the court’s conflation of illegal use and breach of covenant pervaded its analysis.

For instance, the tenant offered as a defense a lease addendum, executed by the prior landlord, authorizing Airbnb use. The Appellate Division correctly noted that Cal. Civ., §1598 regards contracts with a single unlawful object as void. However, it was not clear that the addendum was an insular contract (as opposed to a revision of a broader contract for leasing the property), making suspect the wisdom in completely ignoring it. More importantly, if this truly were a “breach of covenant” case, the landlord (or successor) should probably have been estopped from enforcing conduct he condoned under a theory of breach. Again, this would unlikely vindicate the illegal use itself, and a subsequent, correctly pled case for unlawful detainer under the proper statute would seem to have been successful, but this kind of “shotgun” pleading and prosecuting, based on three three-day notices, none of which was for 1161(4) illegal use, has no place in strict compliance “five day land” (as we call it in San Francisco).

With the recent Borsuk decision, a divided Second District left an open question in the appellate courts about whether a tenant could challenge the sufficiency of an unlawful detainer complaint with a motion to quash. San Francisco’s Housing Court has already begun demonstrating its approval of the rationale in Borsuk. Given how often defendants file writ petitions challenging the denial of these motions, it seems that it will only be a matter of time before the First District establishes its own rule for the now-endangered Delta Motion.

Over the years, the Board of Supervisors has amended the Rent Ordinance in various ways to prevent de facto terminations of tenancies. For instance, a “housing service”, like a patio, a parking space or use of a barbecue cannot be severed without the same “just cause” required to end a tenancy generally. The reasoning for this is obvious – a landlord cannot urge their tenants to leave by taking away the features of a tenancy that the tenant has come to rely on.

Similarly, a landlord cannot add to the lease – that is, they cannot create new, unilaterally imposed contract requirements, the violation of which constitutes a material breach of the lease and just cause for eviction. This policy is codified in Section 12.20 of the Rent Board Rules and Regulations.

In Foster v. Britton (2015) 242 Cal. App. 4th 920, a tenant filed an action for declaratory relief against her landlord, seeking a determination of the legal rights under her lease, in response to her landlord unilaterally changing the terms of her tenancy, under Cal. Civ., §827. In response, the landlord took the position that section 827 preempts Section 12.20.

Judge Quidachay of the San Francisco Housing Court ruled in favor of the tenant. In upholding his ruling, the Foster court found authority in the seminal case Birkenfeld v. City of Berkeley (1976) 17 Cal.3d 129 for the proposition that “a municipality has authority to limit the substantive grounds for eviction, but it may not interfere with the procedural protections offered by state law. Nothing in Rule 12.20 interferes with the notice procedures required by section 827, or any other procedural protections. Rather, its effect is to regulate the substantive grounds on which a landlord may evict a tenant”. 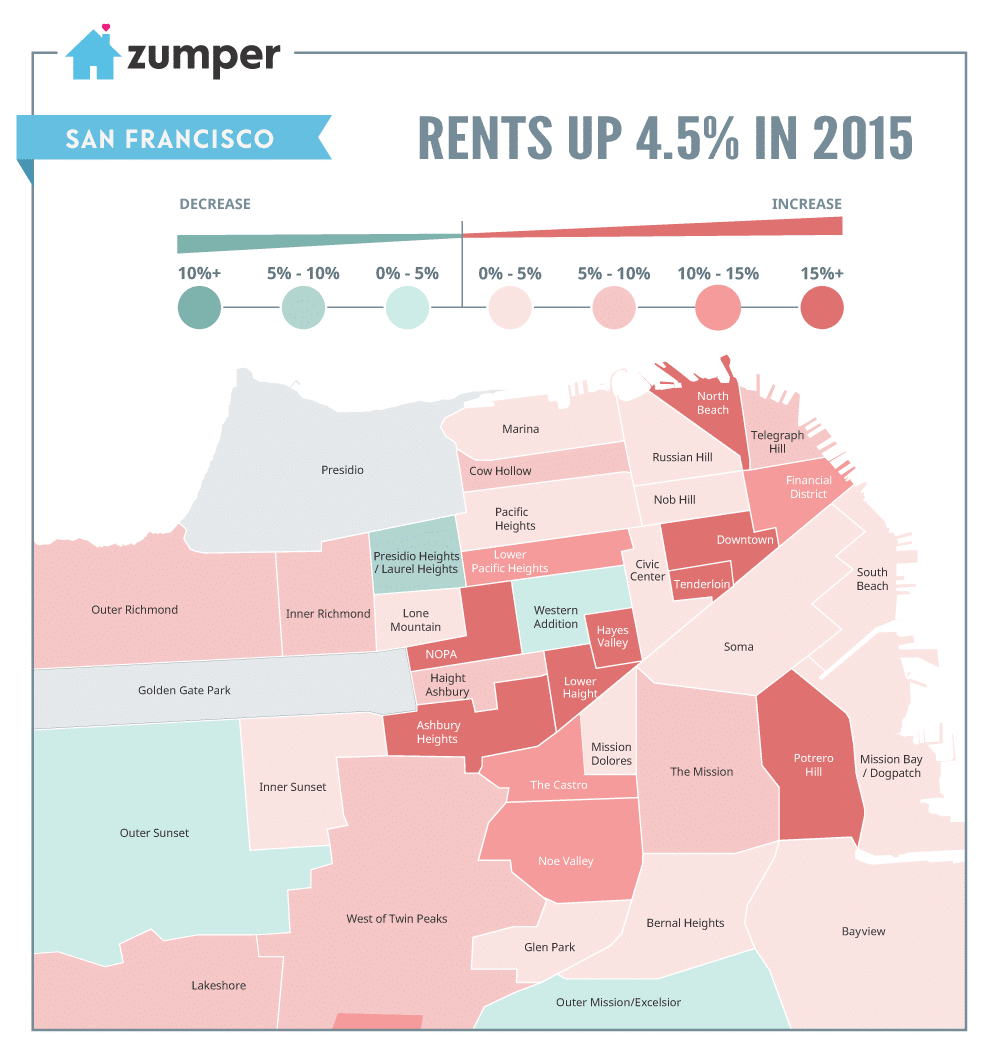 Zumper reports that San Francisco prices increased 4.5% in 2015. While this means that the most expensive housing market in the country got even more expensive, after a 13.5% increase in 2014, this may suggest that prices are approaching their limit – particularly given that prices went down in November of this year.