In 2008, San Francisco voters passed Proposition M – amending the San Francisco Rent Ordinance to include “tenant harassment” regulations (implemented as Section 37.10B). A group of petitioners (including landlords, landlord attorneys, the San Francisco Apartment Association and the SF Association of Realtors) filed a facial challenge against its provisions.

That case, Larson v. CCSF, overturned several of its provisions. The court found that the prohibition on continued buyout offers (after a tenant notified the landlord that they weren’t interested) violated free speech rights. Another provision allowing the Rent Board to award damages violated the judicial powers doctrine (by vesting judicial authority in an agency). Other provisions survived: San Francisco could prohibit offers to vacate accompanied by threats or intimidation (as a reasonable time, place and manner restriction on speech). And the Rent Board was permitted to award a reduction of rent based on a quantifiable reduction in housing services.

The full text of Proposition M is available here 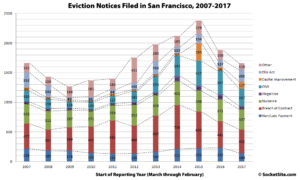 SocketSite.com reports the ten-year trend of eviction notices filed with the San Francisco Rent Board. The trend for 2017 is a decrease across the board, with one exception – the Ellis Act.

SocketSite doesn’t express an opinion on the cause for the trend (at least until you get to the comment’s section). However, a recent decline in breach/nuisance evictions may be attributable to the 2015 Jane Kim Amendment (which heightened both the pleading standard and the substantive threshold for a landlord to prevail here). The recent decline in OMI/RMI evictions may be because of the uncertainty of the “educator” amendment or the more stringent enforcement of fraudulent owner move-in evictions. Ellis Act evictions may be up in recent years (compared to 2013) following a dip during the uncertainty created by the “Campos I” and “Campos II” enhanced relocation assistance payment legislation.

The Rent Board has also published new relocation payment amounts for Ellis Act evictions and other non-fault based evictions.

The San Francisco Rent Board has published the minutes for its July 2017 meeting. It also published the agenda for its next meeting.

The San Francisco Chronicle reports on the Campos enhanced relocation payment “law die[d] quietly” last week. The “law” in question was actually a pair of efforts in 2014 and 2015, introduced by then-Supervisor Campos, which would increase the relocation assistance payment owed to tenants to be displaced by the Ellis Act, from an inflation-adjusted payment (roughly equal to first and last month’s rent and deposit for a replacement apartment) to a 24-month rent subsidy, compensating for the difference between the displaced tenant’s former rent-controlled rate and fair market value.

The 2014 ordinance was essentially a blank check, where the rent differential could easily reach six figures per unit. Property owners quickly challenged Ordinance 54-14 in both state court (Jacoby v. CCSF) and federal court (Levin v. CCSF). Each court determined that Ordinance 54-14 was invalid. However, the court in Jacoby found that the payment was not “reasonable” under the existing standard for mitigation payments (set forth in Pieri v. City & Cty. of San Francisco (2006) 137 Cal. App. 4th 886), while the Levin court made a determination on constitutional takings grounds, finding the payment was an “exaction” unrelated to the owner’s choice to exit the residential rental market. (It found that the adverse impacts that the payment sought to alleviate were not caused by the landlord’s choice to use the Ellis Act, but by “market forces unrelated to the impact of the property owner’s use of the property”.)

San Francisco tried to institute enhanced mitigation payments again in 2015, with Ordinance 68-15. The second ordinance grafted itself onto the first one (creating some confusion about how and when it was to be applied), capping the payment at $50,000 per unit and providing an administrative review process for landlords who could not afford the increased payment. Again, property owners challenged the ordinance as conflicting with the Ellis Act.

The trial court in Coyne v. CCSF found that the changes did not solve the preemption problems, and reached the same conclusion. The First District Court of Appeal later reviewed Jacoby and Coyne together, finding that the enhanced mitigation payment ordinance imposed a “prohibitive price” on a property owner’s ability to exit the residential rental market, in the published opinion Coyne v. City & Cty. of San Francisco (2017) 9 Cal. App. 5th 1215.

The City (as well as amicus curiae) sought a depublication order from the Supreme Court of California, urging that Coyne v. CCSF created a new preemption standard and, by referencing Levin, improperly extended exactions takings jurisprudence. However, in a unanimous ruling, the Supreme Court denied the requests to depublish and further declined to review the matter on its own motion.

The San Francisco Rent Board has published the minutes for its June 2017 meeting. It also published the agenda for its next meeting.

The First District Court of Appeal recently vindicated a landlord’s efforts to terminate a tenancy pursuant to the Ellis Act, where both the Trial Court and the Appellate Division found the notice of termination of tenancy invalid, as the landlord paid only the adults and not the child who occupied the unit. That case, Danger Panda v. Launiu interpreted the term “tenant” in the section of the Rent Ordinance requiring relocation payments to “tenants”, determining that this was a term of art with a specific import: “Construing section 37.2(t) according to its plain language, a tenant is a person who is entitled to occupy a residential unit (1) to the exclusion of all others and (2) pursuant to a written agreement; oral agreement; sub tenancy approved by the landlord; or sufferance.” The Court noted, however, that it was only interpreting that term, not considering whether the Board of Supervisors had the authority to confer a relocation benefit on a child.

Supervisor Ronen picked up this cue, introducing Ordinance 123-17, which requires payment to every “Eligible Tenant”, defined as “each authorized occupant of the rental unit regardless of the occupant’s age”. Danger Panda resolved the uncertainty in whether minors were entitled to Ellis Act relocation assistance payments (as they are for other non-fault evictions under the Rent Ordinance). Interestingly, Ordinance 123-17 may resolve further uncertainty about whether a landlord is required to pay persons with whom she has no privity, but who nonetheless occupy a rental unit.

The San Francisco Rent Board has published the minutes for its May 2017 meeting. It also published the agenda for its next meeting.

The San Francisco Rent Board has prepared its Annual Report on Eviction Notices for the San Francisco Board of Supervisors, detailing the number of eviction notices filed with the Rent Board from March 1, 2016 to February 28, 2017, indexed by the “just cause” identified by the landlord. 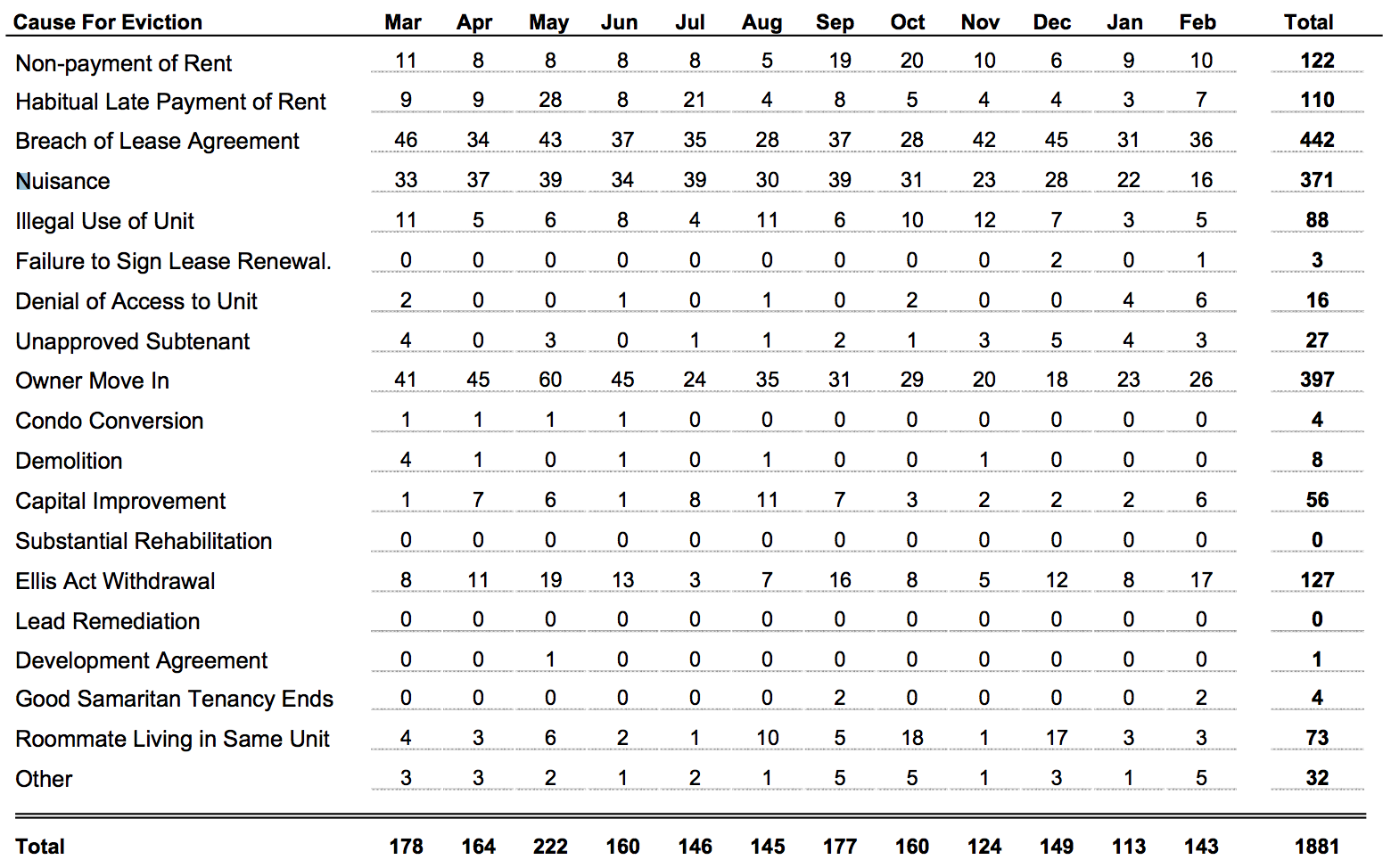 The report shows an overall decline in non-fault evictions, compared to the previous year, including an 18% drop in Ellis Act evictions and a 5% drop in Owner Move-In evictions.

The San Francisco Rent Board has published the minutes for its April 2017 meeting. It also published the agenda for its next meeting.