We did it, you guys… We’re still on top. SocketSite reports a record-setting asking price for apartments in San Francisco, as of first quarter 2015, of $3,458 per month. San Francisco renters may have reasons to be optimistic though. The rate of increase appears to be slowing (at least compared to rates in Oakland), and new construction projects should cause prices to at least flatten out eventually.

Mayor Lee and Supervisor Farrell introduced an amendment to the new “Airbnb law” this week. Currently, an overloaded Planning Department has been charged with regulation of Airbnb (and other short term rental) listings. This comes on the heals of another amendment proposed by Supervisors Campos and Kim, and mere months after the original ordinance took effect.

The Lee/ Farrell amendment would create a new office, the Office of Short-Term Rental Administration and Enforcement, which, as the name suggests, would be able to focus more singularly on this type of housing use, which The Chronicle estimates to affect 5,000 homes in the City for Airbnb listings and another 1,200 for VRBO.

Meanwhile, Airbnb CEO Brian Chesky appeared on APM’s Marketplace this week and explained that Airbnb’s own studies show that Airbnb either has no impact or a de minimis impact on rental prices and that it is actually allowing people to stay in their homes… so no one has anything to worry about.

The amendment would also increase the limit for allowable listings to 120 days per year, up from 90 in the existing version.

Senator Mark Leno presented SB 364 to the Senate Housing Committee today – his second effort to impose “anti-speculator” restrictions on Ellis Act withdrawals in San Francisco. Busloads of San Franciscans, on both sides of the issue, headed to Sacramento to share their opinions. Ultimately, the 6-5 vote against SB 364 maintains the status quo in the City, pending reconsideration, where the housing committee will hold a second vote (so stay tuned).

Leno’s SB 364 would add provisions to the Ellis Act providing that, in order to invoke the Ellis Act to “go out of the rental business” an owner would need to own the property for “five continuous years or more”. It would also provide that an owner who even initiated an Ellis Act withdrawal for one building could not do so for a subsequently-acquired building for another ten years (forcing owners to really stand behind the statement, “I don’t want to be a landlord”).

Check out Curbed SF for a “sad chart” that “confirms SF isn’t adding new housing fast enough”, and other depressing observations like, “San Francisco is very good at producing above-moderate income housing, and middling at producing very-low-income housing, but pretty much abysmal at the rest”. 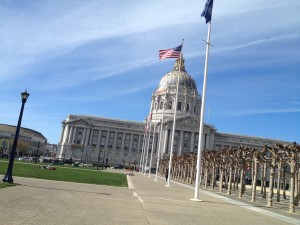 San Francisco Board of Supervisors passes legislation supporting SB 364 – Senator Mark Leno’s second effort to impose restrictions to the use of the Ellis Act to withdraw residential rental property from the rental market. (Among other things, the law would require that a landlord first own the property for five years before seeking to “go out of business” as an “anti-speculation” measure.)

The SF Examiner reports that Sinbad’s restaurant, a decades’ old waterfront icon, may soon serve its last shrimp cocktail. The restaurant’s landlord, the Port of San Francisco, is expecting the restaurant to vacate by March 21, 2015, as the San Francisco Bay Conservation and Development Commission plans to demolish Pier 2 that month, allowing construction to expand the ferry terminal in 2016.

That is, unless the Stinson brothers – the restaurant’s owners – are successful in evoking the “no harm, no foul” doctrine, to continue operating until the City breaks ground on construction.

Charles Stinson was also briefly involved in an attempt to reopen a restaurant in the San Francisco historical landmark, Julius Castle, at the top of Telegraph Hill. That effort resulted in, among other things, the decision Julius Castle Restaurant Inc. v. Payne (2013) 216 Cal.App.4th 1423, where the First District Court of Appeals analyzed fraud in the inducement of commercial lease agreements. 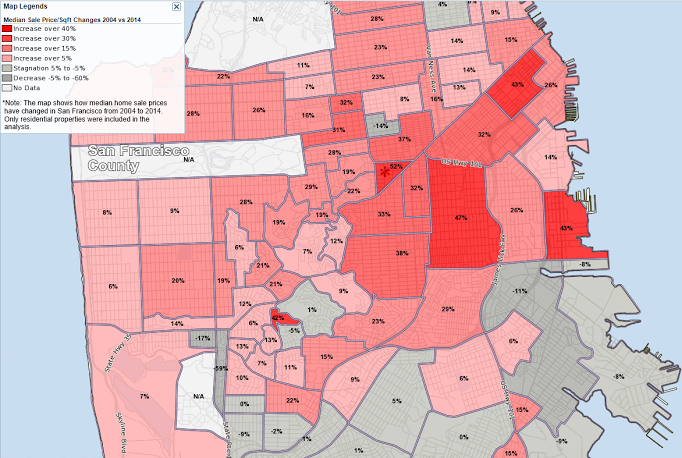 PropertyShark.com put together an interesting map of changes in San Francisco median home prices, by neighborhood, over the past decade. Zoom in for changes in price per square foot. Surprisingly, some neighborhoods dropped in price (presumably within a wide margin of error).

The San Francisco Business Times reports that Mayor Ed Lee has proposed a $250 million general obligation bond to pay for new construction, which he will present to the voters this November, noting the last time the City passed a housing bond was in 1996. The bond would allocate funds to help middle class residents.

Last week, the United States District Court for the Northern District of California invalidated an amendment to the San Francisco Rent Ordinance requiring an increase to the existing relocation payments owed to tenants in non-fault evictions pursuant to the Ellis Act. The new, enhanced payments were calculated based on market rate differentials – the difference between the tenant’s rent-controlled rental rate and the cost of a comparable unit on the open market. In some cases, this number reached six figures per unit.

Finding that the new law constituted a monetary exaction, prohibited under the Takings Clause without the payment of “just compensation”, Judge Breyer found that there was no “essential nexus” between the right to change the use of property (i.e., to no longer allow rentals) and there was no “rough proportionality” between the costs a displaced tenant faced on the open market and the direct consequences of a decision by the landlord to go out of the rental business. (By contrast, challenges to the previous relocation payment scheme, requiring a payment based on the cost of first months’ rent, last months’ rent, and security deposit at a new rental unit, have been upheld as comporting with the Ellis Act.) The City is expected to appeal the decision to the 9th Circuit.

The SF Examiner explores the work of the “Eviction Assistance Unit”, which allows the Sheriff’s Department to interact with tenants to be displaced, to provide them with housing resources. As the Examiner explains, the unit was created by former Sheriff Michael Hennessey, following a tradition of San Francisco Sheriffs who look for alternatives to mechanically carrying out their duty to evict tenants. (The famous example was the refusal of former Sheriff Richard Hongisto to evict a large number of occupants from the International Hotel in the 1970s. This resulted in his going to jail for contempt, and it generated pro-tenant sentiment that led to the adoption of eviction control protections in the Rent Ordinance.)